Final week, 4 Black Lives Matter protesters who tore down of a statue in Bristol of the infamous slave dealer Edward Colston had been acquitted of all fees. The 4 left Bristol crown courtroom in jubilant temper, having argued of their defence that they had been on ‘the proper facet of historical past’.

Sage Willoughby, one of the 4 defendants, tells Nosheen Iqbal that the day the statue got here down is all a blur for him, however that he is aware of what he did was proper. All 4 of the defendants accepted their involvement in flattening the statue, however argued efficiently that that they had acted in a simply means, such was the egregious nature of Colston’s involvement in the slave commerce, and that the statue’s continued existence in the centre of Bristol was grossly offensive.

The Guardian’s Damien Gayle was in courtroom for the trial and describes a case by which David Olusoga, an eminent historian of slavery, was known as for the defence. However the response to the verdict has been polarised, with many main Conservatives criticising the final result as a ‘vandals constitution’. 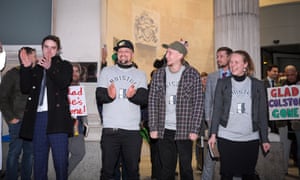 The Guardian is editorially unbiased.
And we wish to preserve our journalism open and accessible to all.
However we more and more want our readers to fund our work.

With Russian guns pointed at Ukraine, West and Moscow dive into talks – POLITICO